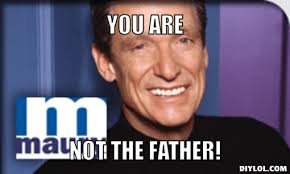 There’s a reason Maury Povich is the leading talk show host of daytime TV, and science may explain the reason. It is a fact of biology that while it is relatively difficult for a woman to mistakenly believe a child is hers, such errors are often too common for men. A man has to trust that the woman he is with is bearing his child when she tells him it’s his. Unfortunately, not all women are entirely trustworthy, and even those who are can honestly identify the wrong man as the father of her child.

Today, however, things have changed because paternity can be proven or disproven conclusively with DNA tests. A man can be absolutely sure if a child is his or not – and it’s not a trivial matter. Lest anyone thinking that there is nothing but misogynistic bigotry behind the concern over accurate claims of paternity, a 1999 study by the American Association of Blood Banks discovered that in 30 % of 280,000 blood tests performed to determine paternity, the man tested was not actually the biological father of his children, and that number continues to rise.

So how does this happen? More often than not the man chooses to ignore even the faintest intuitive sense that something is off. Perhaps their child resembles the mother’s ex lover? Perhaps the mother makes sneaky comments like “I wish someone else were the daddy.” Or maybe the man sincerely believes that the mother is faithful, meanwhile everyone around knows the mother is cheating.

In the event you happened to be a bystander in the later scenario, you definitely need to find a way to suggest to your friend that they go and get a paternity test. Unfortunately this is often easier said than done. What if you’re right about the cheating but wrong about the paternity of the child? What if he refuses to get a test and cuts you off as a friend for accusing their child’s mother of cheating? What if you lose mutual friends a result of simply trying to do the right thing? These are all very real possibilities, but they still shouldn’t stop you from getting your point across. So instead of staying silent, let The Incognito Help Line tell your friend to get a DNA test, so don’t have to. If you’re not familiar with the service, The Incognito Help Line, is an anonymous message provider that will personally call and deliver any message to anyone with the promise that it will never be traced back to you.

At the end of the day, people too often love to shoot the messenger instead of just listening to the message. Yet remember, while this is not an easy job, it’s a matter of his life and his kids’ lives as well, and things only get worse over time. So the sooner you say something, the better. Good luck!

Click Here To Place An Order Now or for more ideas visit The Incognito Help Line.